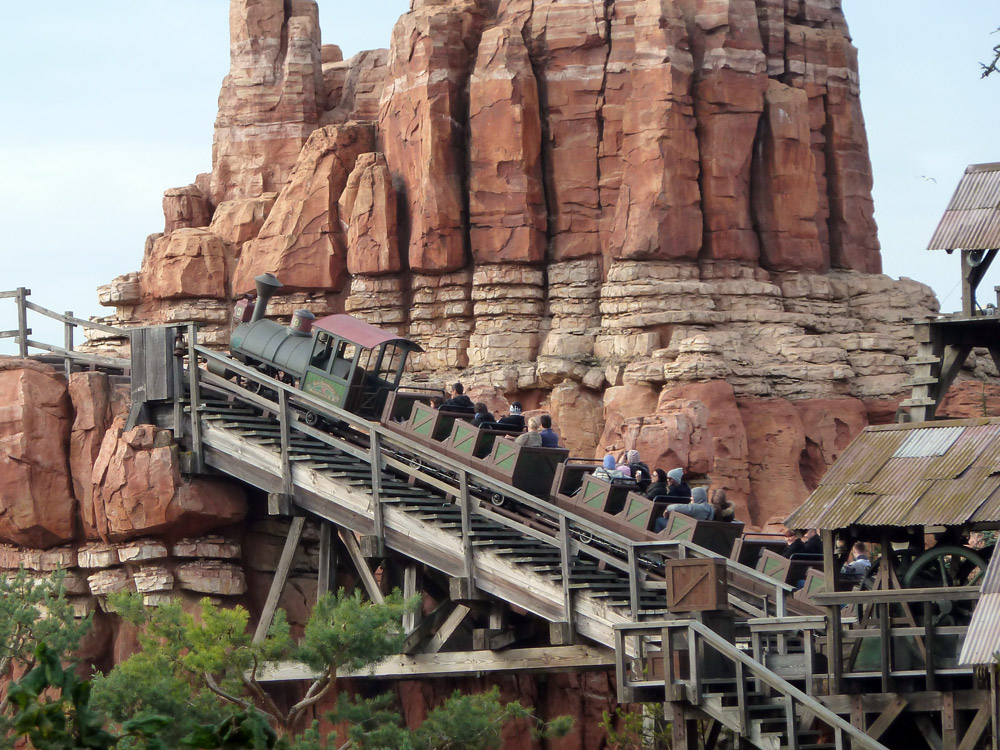 Last weekend was my 13th visit to Disneyland Paris, and on my previous 12 visits I had not once ridden Big Thunder Mountain. In fact it’s probably fair to say that I hadn’t even contemplated it. I’m what you’d call a thrill avoider when it comes to rides – the falls in Pirates of the Caribbean and Casey Jr are enough of an adrenaline rush for me. However, many of you have said that Big Thunder Mountain is the best ride in the resort, and my wife has told me it’s the best themed attraction in Disneyland Paris. I trust both their judgement, and probably for very different reasons!

When meeting some other people who’d been invited to the press events last Saturday I announced to them, and my contact in Disneyland Paris who’d kindly invited us, that I would ride Big Thunder Mountain for the first time. I knew that if I told them I’d not be able to back out, and as much as I was still quite scared of the prospect of riding the runaway train, it was something I really wanted to do, I think.

Fast forward to the Saturday evening and after a fascinating and slightly eerie 30 minutes spent exploring Frontierland with nobody else around, I met up with the guys again for the Christmas Wishes show in the Central Plaza area. I was on a high after the show, as we walked to dinner at the Cowboy Cookout, first stopping to take advantage of the free play on the Rustler Roundup Shootin’ Gallery. I don’t think it would be bragging too much to say that John Wayne could have taken lessons from the display I put on.

Moments later and we approach Big Thunder Mountain, and I’d forgotten all about my quest, and to to be honest I’d hoped everyone else had too. No such luck – it was on all their minds and they made sure I was going to be able to cross this one off my to do list. My nerves began to soar as we walked around the queueing area, and for once I was hoping for more people to be in front of me. Alas, my luck was out, as we walked straight through and onto one of the waiting carriages. I chose to sit right at the front, after hearing that the back is where the most thrilling ride is experienced.

Off we go, on not only my first time on Big Thunder Mountain, but my first time on a coaster in my life. Well, one that travelled faster and more crazily than Casey Jr anyway. I gripped on for dear life as we started nice and gently off down the mine. However, it didn’t take long for speed and height to pick up as we climbed a hill, and as we went flying over the side, so started the most terrifying few minutes of my life!

I’d be lying if I said I could recall any of the much touted theming, such was my concentration on holding the bar in front of my as tightly as I could and hoping it wouldn’t get any worse than the first few twists and turns. I think the fear I’d built up when massively over-thinking it, was actually far worse than the rise itself, as I distinctly remember actually smiling and dare I say, almost enjoying some of the exhilarating journey.

The vice like grip I had on the bar actually became my undoing, as I was holding on so tightly that my hands began to tingle and it felt like they were even swelling up. So I now had this strange sensation in my hands to deal with as well as the speeding train. To say I was relieved when it stopped would be a massive under-statement, it felt like my birthday and Christmas rolled into one as I got off and felt firm land under my feet. I actually had to scoop my bag up because I’d lost all use of my fingers and they didn’t return to their normal state until about 20 minutes later!

I’m pleased to say that I kept my eyes open for almost the whole ride, only closing them for the last bit in the dark, strangely. I’m sure I offered much amusement to those I was with but I’m proud of myself for finally riding Big Thunder Mountain, and I’m grateful they were there to make sure I didn’t chicken out. Would I go on it again? I think I would, after all the fear of the unknown wouldn’t be there any more and I’d know not to hold on quite so tightly. Plus my son will probably be tall enough to ride when we go as a family again next summer, and I know for a fact he’ll want to ride it. This time I’ll try to take in the fantastic theming and maybe, just maybe, I might even enjoy it.