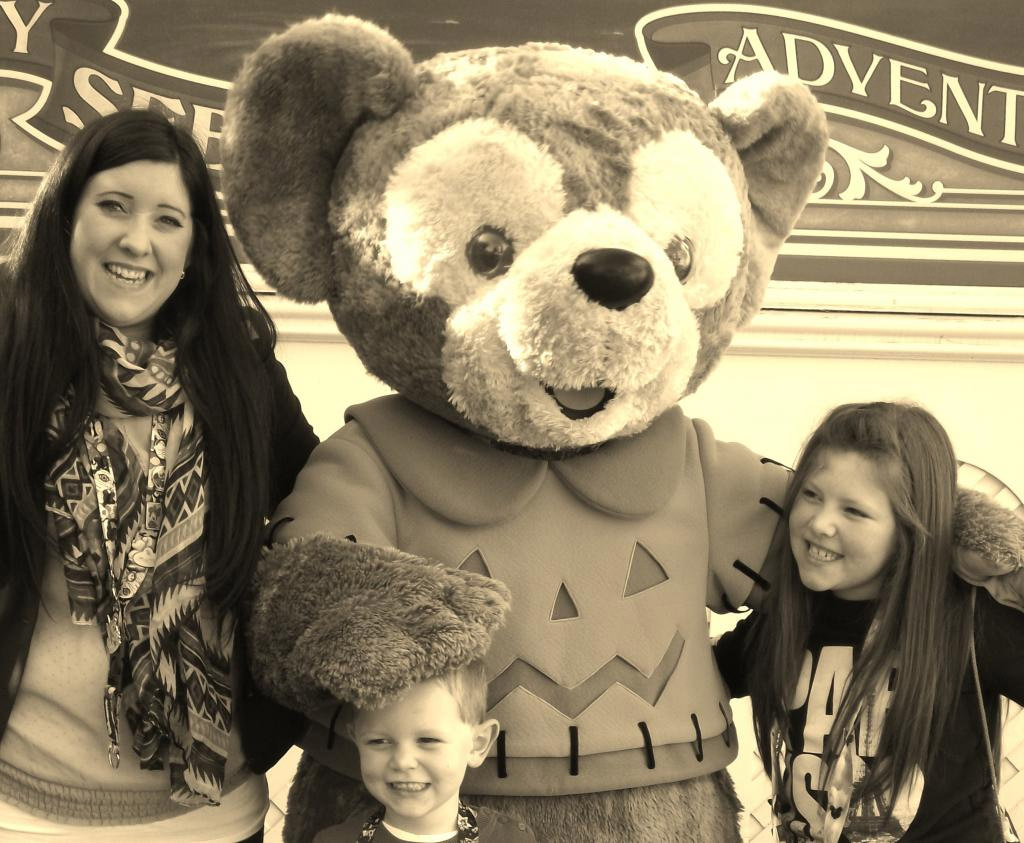 1. When did you first visit Disneyland Paris?
We first visited in March 2010 and stayed at the Santa Fe. Myself and my now husband brought our then 4 year old daughter and Shane’s brother and niece also joined us. It was only a short trip of 2 nights 3 days and we were instantly hooked!

2. How many times have you been in total?
So far 8 times with trips 9, 10 and 11 imminent! We will have stayed at all the onsite hotels as of May and I’m so excited to be staying at the Disneyland Hotel finally. Its also my birthday the day we arrive so lots to look forward to.

3. What’s your first memory of Disneyland Paris?
Walking through the turnstiles and being amazed by Main St and its whole old time feel. We ran straight into Mary’s Penguins, Mary Poppins herself and Bert and I just thought Wow if this is how they welcome you then this place is something special!

4. What’s your favourite attraction and why?
I love everything that propels you fast, upside down, inside out, makes you scream and spend your time in the queue freaking out about whether you’ll survive! But my absolute favourite is Big Thunder Mountain because the whole family can do it and will readily redo it all day. I love the theme music in the queue and the way that the kids now know instinctively when to do cheesy faces for the camera and that mixed feeling of fear and excitement just as you hit the top of the track before a drop.

5. Where do you stay when you visit Disneyland Paris?
Mostly onsite and onsite is my preference. I love something about all the onsite hotels really – the Santa Fe is fresh and now well themed, Sequoia Lodge is an ideal winter retreat, I love the feel of the Newport its all about the nautical theme for me! Hotel New York is a great spot for adults and it smells pretty amazing. We are returning to the Cheyenne next year as it didn’t impress us the last time we stayed there and I’d like to give it another chance.

6. Where’s your favourite place to eat?
Oooh this is a toughie! For Counter service probably Col Haithi’s Pizza Outpost. We had a great meal there last October and the setting was great. For Buffets it has to be the cheaper ones so La Cantina or The Chuckwagon as I find they have a larger selection the say Hunter’s Grill or Parkside for instance and the food was of better quality! For Table service it would have to be Walt’s – we have eaten here twice and both times the food was fantastic. The desserts are out of this world.

7. What you do first when you get to Disneyland Paris?
After a stroll down Main St we always veer left for Frontierland. Its normally a turn on Phantom Manor and Big Thunder Mountain before we head for Fantasyland.

8. Pins, Vinylmations or neither?
Definitely Pins! My son (5) and daughter (8) love collecting them and swapping them. They get new ones if they are particularly brave and try a new ride and love stalking Cast Members for trades! My most cherished pin is my Club Actionnaires one as I’m now no longer a member.

9. Do you want to see the Captain Jack Sparrow brought to the Disneyland Paris Pirates of the Caribbean like they have in Walt Disney World and Disneyland?
No, it doesn’t really bother me. I think its great as it is.

10. Is there anything in Disneyland Paris you have never done that still would like to do?
The Studios Tour or Tower of Terror tour in English if it were possible! I am looking forward to trying the new Ratatouille Ride and love reading the rumours and news about it.

11. Before you go do you plan yours days or just see what happens when you are there?
I love planning! I have loads of notebooks and enjoy working out budgets and planning meals and all aspects of our holiday. But I am not militant! We often change plans and go with the flow and as we feel. I do look at closures and make note of them so that we don’t miss out on something we could easily have done. I like the security you get from being organised!

12. What piece of music or song do you most associate with Disneyland Paris and why?
A cowboy needs a horse! Its instrumental and can be heard in Frontierland, we often hear it in the queue for Big Thunder Mountain. Its just fun and upbeat and reminds me of the Country Music my Dad loves

13. If you had to make someone a fan of Disneyland Paris by showing them 5 attractions/buildings/shows – what would they be?
1st up has to be Main St – it sets the tone for a brilliant day! I love Dapper Dans barber shop, the extraction is progress noises from the dentists and just the whole look and feel of Main St. Then it has to be Phantom Manor for its amazing detail. Tower of Terror for its theming and whole feel. Stitch Live because he is hilarious! And finally Dreams. I especially love the Tangled section. So emotional!

14. If you could add one new attraction to Disneyland Paris what would it be and where would you put it?
Oooh this is another hard question! I would do something more with Adventureland as it needs a little something over by Indiana Jones but equally the Old Woody’s Round Up / Chaparral area is in desperate need of something new, geared towards the little ones. Something based around UP would be a winner in my eyes although that would be more Walt Disney Studios style then the Disneyland Park.

15. If you could spend one night anywhere in Disneyland Paris, except the hotels, where would it be?
In the Swiss Family Robinson’s bed in the Tree House. I’d imagine you would have a great view of the park and it looks pretty cosy too.

16. Are you planning to visit Disneyland Paris when Ratatouille: the Ride opens?
Yes our November trip will be all about the Rat! It is my son’s favourite film so I think we will be heading straight for Walt Disney Studios when we arrive in Disneyland Paris.

17. If you could be a Cast Member for a day in Disneyland Paris, where would you work?
In Pirates of the Caribbean. Their uniform is brilliant and we always meet fun Cast Members on the entrance who are quick to sign the kids up to be new pirate recruits or play sword fight in the shop at the end.

18. Is there anything you dislike about Disneyland Paris or would change?
I think Disneyland Paris is being well taken care of at the minute and it is reassuring to see constant improvements to both parks and the hotels. I look forward to the future but a couple of day time shows would be great too! Or perhaps a continuation of the cavalcades for Halloween and Christmas for other seasons.

19. What’s your single greatest memory of Disneyland Paris?
I was nervous last trip because I was bringing the kids with no other adult. Near the end of the trip we were sat watching waiting for Dreams! and chatting about the fun we had had and the kid’s appreciation and sheer happiness at being where they were at that exact moment was overwhelming. To see them carefree and truly enjoying every second makes all the planning and the scrimping and saving work it all.

20. In no more than 20 words I love Disneyland Paris because…
It is like every Disney film – amazing, joyful, uplifting, magical and unforgettable.