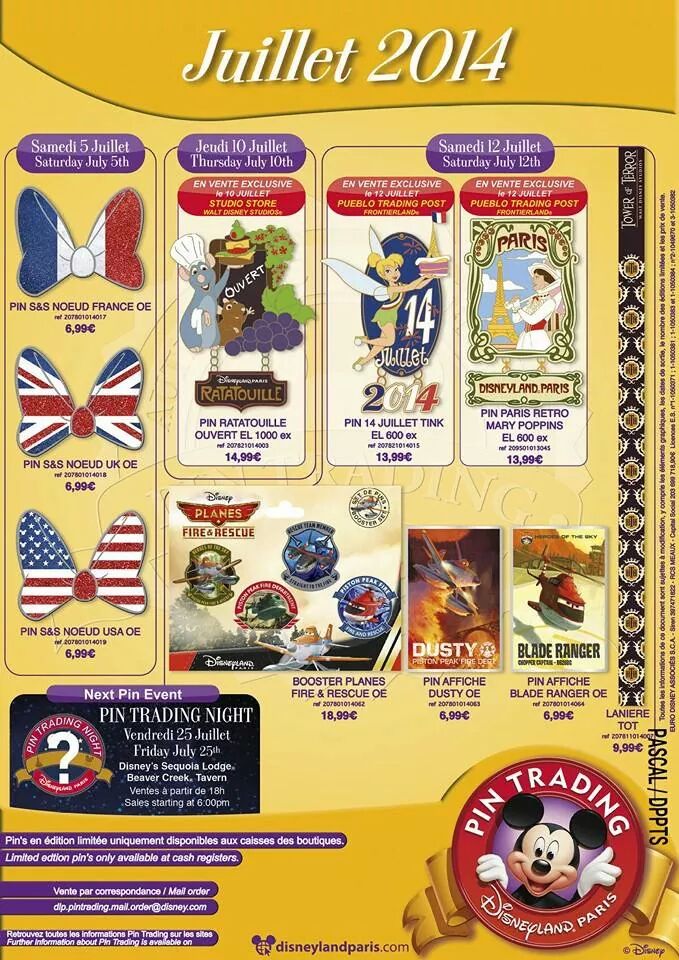 With all the excitement about Ratatouille: The Adventure, June has flown by, and so it is now time to reveal and analyse the Disneyland Paris Pins for July 2014…go! Thanks to friend and ex Disneyland Paris Cast Member @MyDreamVoyages for tweeting the photo of the releases.

What is it with these flag pins? They must be selling if they are still producing, but really? First we had Eiffel Tower flags, then those awful US/UK flag combinations, and now flag bows. These are some of the least original and dullest pins I have ever seen. People, please stop buying them so they have to think of some better designs, thank you.

After the in 2 months and in 1 month, we finally have the Ratatouille is open pin. No surprises that it comes out on July 10th, the day Ratatouille: The Adventure opens to the public. At 1000 pieces I’d say you’ll have to be quick, but there were still some of the in 2 months pins being sold last week when the in 1 month pin had already been released, so you may be lucky.

The Bastille Day Tink pin is what it is, though the cake with an Eiffel tower on is quite sweet. We also have a continuation of the Paris series, which has little to do with Disneyland Paris, but at least is a little stylish. These two come out on the usual release day of Saturday, the 12th July, and all 3 will be initially sold only at the Pueblo Trading Post in Frontierland.

The second Planes film is coming out so here are a whole bunch of planes pins. I wouldn’t rush to buy them unless you are a huge Planes fan, as these will no doubt be discounted in just a couple of months. As the school holidays are fast approaching it does make some sense to have kid targeted pins released for July, so I’ll let them off on this one.

They also go nicely with the massive Planes 2 image that has replaced the Frozen one at Studio 1 in Walt Disney Studios. Photo comes with thanks from @InsideDLParis

Why of why Disneyland Paris merchandising department must you tease me like this. One month on one month off, one month on two months off. Please, for the sake of my sanity, keep releasing the Attraction pins at least once a month and stop making my blood boil with boring flag pins of all different varieties. Stop releasing generic pins and pins that have nothing really to do with Disneyland Paris. You have the most beautiful Disney park in the whole world, and yet the pins would have you believe they are being sold in a Disney Store – a clearance one at that.

Would it have been crazy to have released the Ratatouille: The Adventure Attraction pin in the same month that it opens? If we can handle 6 Planes pins and 3 flag bow pins, I’m sure we can handle 2 far superior Ratatouille pins. Am I getting on my soap box again? Of course, as a pin collector for over a decade I care about these things. Not as much as I care about my family and my iPad, but enough that I hate seeing such low standards again and again.

Yup, there’s Tower of Terror lanyard. Nothing against Tower of Terror, in fact I adore the theming and the ride didn’t scare me as much as the anticipation, but wouldn’t a Planes or Ratatouille one be more relevant? Next trading event is in the Beaver Creek Tavern over at the Sequoia Lodge Hotel on Friday July 25th. You can take all your flag pins over there, but beware, they might laugh at you 😉

All in all it’s a terrible month for pins really. Nice Ratatouille opening pin and that’s about it. Just a whole bunch of frustration from me! 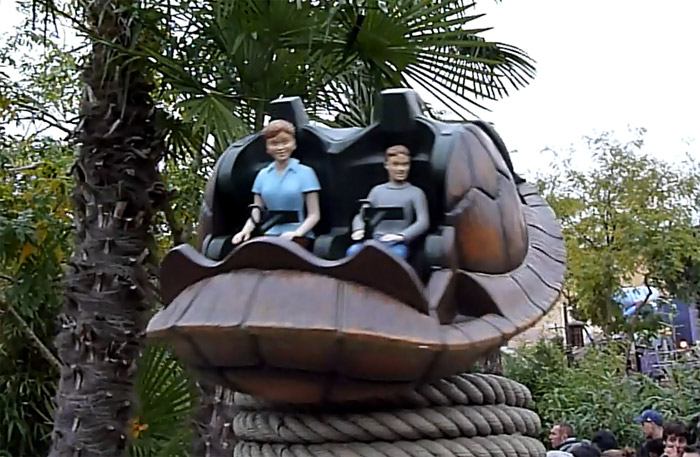