Remember last month when we were speculating about a new show that was rumoured to be coming to The Chaparral Theater and I wondered if it would be Frozen 2.0 or something completely new? Well it seems like the latter is what is happening, after the casting poster was released yesterday asking for people to audition for the roles of Pocahontas, Rapunzel & Flynn Rider, and @DisneylandBerry tweeting that there will be a new show in The Chaparral Theater from February to May 2016. To add credence to DisneylandBerry’s Tweet, @InsideDLParis also confirmed the Chaparral Theater as the location this morning. Now while not confirmed by Disneyland Paris themselves, that’s two heavyweight sources singing from the same song sheet. 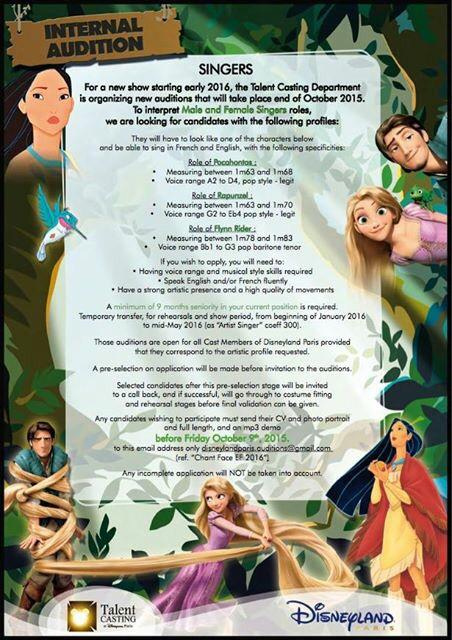 The best thing, for me, about this audition notice is the request for singers, so we will once again be getting a show where the lead characters will be singing live, something we’ve not had for quite some time in Disneyland Paris, and something that will be very welcome. I had wondered why they would replace the Frozen sing-along show so soon, especially given how hugely popular it has been and has been instrumental as part of the Frozen Summer Fun season in seeing an upturn in revenue for Disneyland Paris. But if this means we get two great shows, alternating between the seasons, then we will be back to the days of Tarzan and Mickey’s Winter Wonderland, and The Chaparral Theater will once again be the feature location for stage entertainment in Disneyland Paris.

What form the show will take is still to be revealed, but we do know from the interview with Disneyland Paris Show Director Christophe Leclercq conducted by Kris Van de Sande over at Endor Express, that they have been working on a brand new show for The Chaparral Theater that will be a new kind of experience. Whether he means new for Disneyland Paris, and we could see something like Mickey and the Wondrous Book or Mickey and the Magical Map, or completely new to Disney parks remains to be seen, but I for one am very excited by this prospect. The characters involved work perfectly with the woody setting in Frontierland, and of course these are just the ones we know about right now, I’m sure we’ll see more characters added in time.

It seems the more we find out and with what we already know, the build up to the 25th Anniversary of Disneyland Paris is looking to be something very special, as the resort is heading towards an era of unparalleled attraction and show quality throughout.