A Maleficent Halloween at Disneyland® Paris 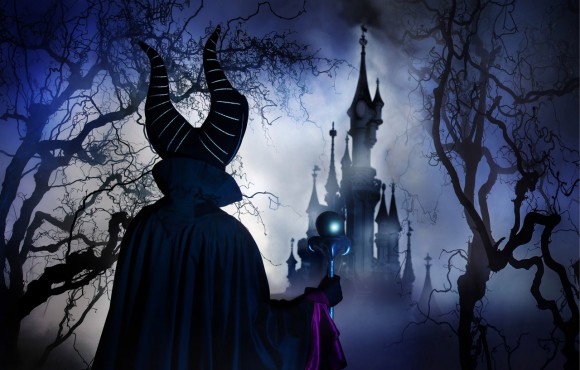 And that’s not all! During this delightfully frightening month, ghosts and “Disney’s Funky Pumpkins*” will take possession of Main Street, U.S.A., astonishing pumpkins will take over the flowerbeds in Central Plaza and Frontierland will be transformed into an autumn garden, where sunflowers and pumpkins will take centre stage. Finally, Mickey and friends will offer guests a special Harvest festival-themed cavalcade, not far from Minnie’s Halloween Costume Corner or the incredible candy-making machine invented by greedy Goofy, all designed to ensure Disney’s Halloween Festival is a laugh a minute!

Mickey and Minnie pay homage to the Harvest season from their huge horn of plenty, filled with autumn leaves, fruits and pumpkins. Behind them, Chip and Dale, accompanied by the charming Clarice, have taken advantage of the Harvest to steal and hoard as many hazelnuts as they can lay their hands on!

They thought they could keep a low profile throughout Halloween month, but guests will only be able to unmask them and immortalise them in a photo!

The ghosts of the former residents of Main Street, U.S.A. will use Halloween as the perfect opportunity to make their grand appearance. Delighted to be able to make an appearance during Disney’s Halloween Festival, they will take over Main Street, U.S.A., trying to blend into the scenery. The Park’s apprentice ghost hunters will be invited to unmask them, armed with their cameras.

The Disney characters get dressed up to the nines to welcome guests in a vibrant and colourful Halloween atmosphere for those special photo opportunities with guests.

Halloween Costume Corner
Passionate about sewing and fashion, Minnie will invite guests to discover her amazing sewing workshop, specially created for Halloween. An extravagant, colourful world where everyone is encouraged to let their imagination run wild.

Minnie, in her fabulous Halloween-inspired dress will no doubt jump at the opportunity to pose with her admirers.

Goofy Bonbons
Halloween would not be the same without bonbons and spells. For that reason, Goofy has designed and created a truly amazing candy-making machine to dazzle those with a sweet tooth, young and old! Fans of bonbons and Goofy will not miss the opportunity to stop in front of this astonishing machine.

Goofy might even join them to make sure everything is in good working order. A moment to treasure and a chance for everyone to persuade him to share his confectionery secrets!

That is how huge brambles mysteriously appear in the Castle Courtyard. Shaped like the famous horns of Maleficent herself, these brambles form the outline of an imposing dragon.

As night falls, the bramble will take on a more disquieting look, immersing guests in a universe of bright, unsettling colours.

Mickey’s Halloween Celebration
To celebrate Halloween and to provide guests with a unique party, Mickey and friends will offer guests a cavalcade specially dedicated to the Harvest festival, and have naturally been inspired by the autumn and Harvest theme.

Several times a day, Mickey and friends will parade in front of Sleeping Beauty Castle and along Main Street, U.S.A., surrounded by dancers wearing autumn colours.

This year, the lovely Daisy will open the cavalcade. The Three Little Pigs and Horace will join Mickey’s Halloween Celebration on their brand new float “Raise the Rafters!”. Surrounded by owls, black cats, spiders and bats, the Three Little Pigs, Horace and Clarabelle will dance to country music in front of their farm. A tree and an enchanted mushroom will come to life as if by magic.

As for the Disney Characters, they will be showing off their most stunning seasonal costumes. Donald will explore the wonders of autumn in a world made of straw and pumpkins, together with his inseparable nephews Huey, Dewey and Louie. Meanwhile, Uncle Scrooge will bring up the rear, determined to keep determined to keep careful watch over a strange pumpkin that appears to be worth its weight in gold…

The perfect opportunity to capture your best moments with the Disney Villains.
Disney PhotoPass+ allows guests to collect all their souvenir photos taken on rides or with Disney Characters by Park photographers at photo locations in high definition in a virtual portfolio.

The photos are also available on a dedicated website (www.disneyphotopass.eu) and on a mobile app that enables guests to download them, share them on social networks and even purchase personalised photo products (photo albums, mugs, calendars etc.).

Disney’s Halloween Festival will therefore be the ideal time to capture the best poses next to the Disney Villains.

Disney’s Halloween Party: the grand finale on 31 October!
Guaranteed screams, even for the bravest guests. The most magical Halloween night will take place at Disneyland Paris!

The now famous Disney’s Halloween Party** will be held on 31 October 2014 in Disneyland Park. A unique experience to share with family or friends from 8.30 pm to 1 am.

Disneyland Park will reopen its doors after dark and guests will see it as they have never seen it before — in a more mysterious atmosphere than ever, with unexpected animations, terrifyingly delicious surprises and a “hellish” atmosphere. The moon will bring out the ghosts, Disney Villains and other creatures for the party, who are all ready to play their tricks around the most mysterious of places. After enjoying the many attractions Disneyland Park has to offer, guests will be able to immerse themselves in the magical extravaganza of the Disney Dreams®! night-time show.

Hair-raising, high-speed sensations!
Halloween will be the perfect occasion to test guests’ vocal chords on rides that will make them tremble with fear! With The Twilight Zone Tower of TerrorTM, Rock ’n’ Roller Coaster with Aerosmith, Indiana JonesTM and the Temple of Peril, Crush’s Coaster® and Space Mountain: Mission 2, Disneyland Paris will be the place to be to test the limits of the most overwhelming fears.

The Disney Villains have chosen the right occasion for their largest gathering — Disney’s Halloween Festival 2014 has become autumn’s unmissable event.
In an atmosphere where laughter mingles with spells cast by Maleficent, guests will find themselves immersed in a strange, delightful world that only Disneyland Paris knows how to create. To celebrate Halloween and the Harvest season with Mickey and friends, come to Disneyland Paris from 1 October to 2 November 2014.